EXERCISE
Treatment needs often change with changing circumstances. Only a health care professional who has examined you can advise you about your personal health care needs. The reader is encouraged to consult such qualified practitioners as they deem appropriate for specific assistance with any health problem he or she may have. See Disclaimer

Movement is one of the signs of life. The more movement we are  capable of the better - to a point. The movement needs also to be of our own chosing and not a randomly generated twitch that cannot be controlled.

Benefits
Physical exercise is beneficial on multiple levels. (1) (2) Many of us have experienced some of these benefits. We all get some benefit depending the effort and the regularity of the exercise we do.
U.S. News & World Report reveals five ways that exercise can enhance your brainpower and mood:

Further, a new study by researchers at Northwestern University's Feinberg School of Medicine in Chicago have revealed impressive insights into why exercise is so good for your brain. In short, it appears that exercise lowers the activity of bone-morphogenetic protein or BMP, which slows the production of new brain cells.

At the same time, exercise increases Noggin, a brain protein that acts as a BMP antagonist.

"The more Noggin in your brain, the less BMP activity exists and the more stem cell divisions and neurogenesis [production of new brain cells] you experience."

How we go about an exercise will determine what benefit we get.
For example if you do a Cross Crawl how you do it determines you benefit:

If we do a Cross Crawl exercise vigorously, we gain the following:

If we do the Cross Crawl exercise as slowly as possible without struggling to balance,
we gain in:


Weight training and Aerobic exercises are beyond the scope of this web site. They need specialist training for patients to be able to perform these activities with safety and in a way so as NOT TO AGGRAVATE any underlying spinal instability.

The Stretching Exercise Sheet has been designed to minimise stress on the spine.


It is my opinion that some of the stretching poses of yoga may exert positional stress on joints which are not strong enough to withstand the strain. Yoga presupposes that you will have a strong and undamaged spine. To use yoga as a stretching regime, I would urge you to go to yoga classes directed by a qualified yoga instructor who should be able to instruct you in what yoga exercises to avoid.

Walking is one of those exercises that only a very few ambulatory patients need to avoid.
The walk that is beneficial for the spine is a slow relaxed slinky walk. You will know you are going too fast if your shoulders don't ever so slightly rotate forward on the side opposite to the forward moving leg. If you don't see the shoulders moving, SLOW DOWN.

Walking for your spine's health is NOT the same as walking aerobically to improve heart and lung function. If you want to do both, do the aerobic walk first and then for the las t 20 minutes as a warm down, do the spinal slinky walk. It seems to rehydrate the discs more efficiently. You do have to have ingest the right amount of water first. If re-hydration of discs is what you are after then you will need the right nutrients and also a mobile and aligned spine. See the Bulged Disc page. After the walk you will also want to keep the precious fluids that you have refreshed in the disc in place for as long as possible. So lay down for 30 to 90 minutes to allow a chemical reaction to take place in the disc to improve the chances of a repair to the cartilage off the disc.

Standing on 1 leg improves spinal balance, spinal coordination and spinal and pelvic muscle tone. It improves the precision of movement that also assists in the maintenance of spinal position under the dynamics of movement.

All exercise wakes up the brain and nervous system. When we exercise, we generate massive amounts of nerve signals to the brain and from the brain to the body. This stimulus is just one way we have to keep our nerves firing. to keep nerves healthy, we not only have to provide fuel and oxygen by way of blood circulation, we also have to activate each and every nerve in our body. Movement is one way of accomplishing this vital function.

There is a saying derived from physiology: "use it or lose it". The way we lose it is by not using our body, we deplete the signals generated in the nerves. If you lose enough signal to a specific nerve then that nerve dies. If the nerve dies, then you lose control of the organ or tissue at the end of the nerve. So under those circumstances you have lost the control or function of those tissues. It is for that reason that chiropractors work to reduce subluxations. Subluxations change the way the nerves work and as a result changes the way your body works.

NO BODY CAN PERFORM WELL IF SUBLUXATIONS ARE PRESENT.
"Chiropractors are the only professionals who by virtue of their training are qualified to find and correct subluxations." (3)

If you have had an accident or have Phase 2 degeneration or greater, have your spine checked regularly. And you will need to exercise regularly.
It makes good sense! 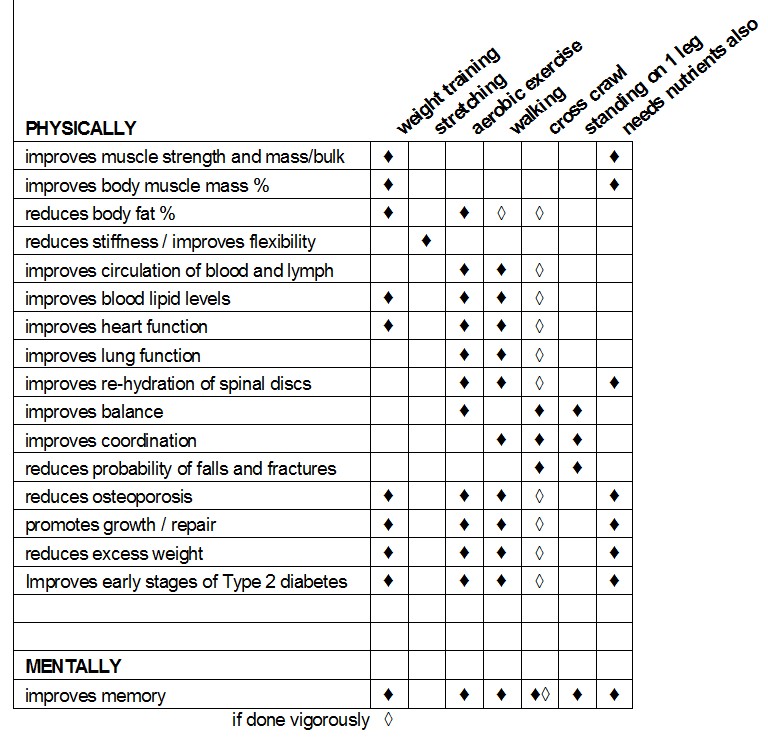